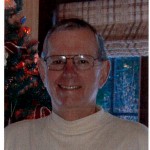 Memorial Tea:  Sat. July 21, 2012   2 – 4  p.m.
Sun Valley Social Centre
Memorial donations in Bryan’s name may be made to the Marjorie Willoughby Hospice, Kamloops or a charity of your choice.

Passed away at Marjorie Willoughby Hospice Home, Kamloops at the age of 76 years.  He was predeceased by his parents Andrew Pugle and Nellie Danielson and his brother Roy Pugle.  He is survived by grieving family:  loving wife Beverley, sons Brad (Cathy) Victor, grandson, Andrew Pugle, granddaughter Michelle Pugle and their mother Carole Pugle as well as many other relatives and friends.

Bryan worked for B.C. Tel for 24 years.  After leaving their employ, he was involved in various business ventures, the main one being Balmoral Store.  After that he worked for B.C. Housing managing the Ilahee Lodge until his retirement.

Bryan has lived in Rosedale, Dawson Creek, Prince George, Kamloops, BlindBay, Little Shuswap and Chase enjoying fishing and camping with friends and his grandchildren, woodworking, curling, gardening and watching all the Canuck and BC Lions games.  He has also given unselfishly with the Sorrento Lions and helped in establishing the Sorrento Lions Manor as well as belonging to the Chase Lions Club for several years.

The family wishes to thank Dr. Sharma, Dr. Burgman, Home Care and Community Services workers Sue and Deanne and all the caring people at the Marjorie Willoughby Hospice Home.

A Memorial Tea will be held at Sun Valley Estates, Saturday, July 21st from 2 to 4 p.m.  In lieu of flowers, memorial donations inBryan’s name may be made to the Marjorie Willoughby Hospice Home, 72 Whiteshield Cresc. S., Kamloops, BC,V2E 2S9 or a charity of your choice.