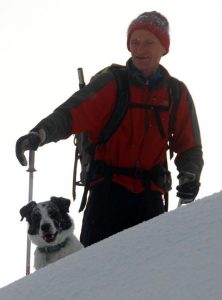 In late December 2018, Stephen had a freak accident at home and suffered a spinal cord injury resulting in quadriplegia.  As devastating as the prognosis was, with his natural grit and determination he tried therapies and ideas suggested to him in the hopes of proving the prognosis wrong and making a livable life.  Steve lived from hospital bed to wheelchair for eight months but never regained the joie de vivre he had for life.  He went from I can’t live like this to I am living like this, to this isn’t a life for me.  Stephen’s suffering from pain, impairment of strength and the inability to freely function ended on August 30th lovingly supported by his family.
Steve began his flying career in 1979.  Together with wife Lori Anthony, they founded and operated their own air charter and scheduled airline, Shuswap Air.  They offered daily flights between Salmon Arm and Vancouver as well as charter flights from the Salmon Arm airport for over ten years.  For the remainder of his career, he flew up and down the west coast and all over B.C. and some western states.  After semi retiring he took on private contracts flying overseas to S. Africa and Iraq.  His flight log books reflect close to seventeen thousand hours in the air.
Stephen was a man of adventure and had many passions; an avid outdoors person who excelled at any and all sports, an obsessive card player (Life Master at Bridge and poker), a compassionate farmer who raised sheep on their small holding, a fellow who was intrigued with options trading on the stock market, a competent builder.  The list goes on.  Whatever he set his mind too, he achieved seemingly easily and effortlessly.
Stephen was born in Salmon Arm and lived many of his years in his hometown but also lived in Vernon, a year in Switzerland as a young boy and work related years in Steveston (Richmond, B.C.).  His parents were Margrit Haemisegger Raffel and Helmut William Raffel. (both predeceased) His sister Suzanne Margrit Raffel Jenseth resides in New York state with her husband Richard Jenseth.  Niece Adrienne Jenseth Sweeney (Danny Sweeney and children Eleanor and Will), nephew Alex Jenseth also reside in New York state.  Stephen is lovingly remembered by Uncle Hansi Fred Haemisegger (Bobby Haemisegger, cousins Lisa Haemisegger Allis and Wynne Haemisegger Deckard), Aunt Leny Paul (Norm and Danny Paul) and Aunt Marianne Haemisegger Vezzani (Piero Vezzani, cousin Viviana Vezzani, husband Karl Spoerri and daughter Ava), cousins Marlene Rosmer Cottrell and Ron Rosmer.  Beloved grandparents “Mutti” and “Granti” Haemisegger and uncle Dudley Paul, Aunt Leta (Michael) Raffel Rosmer, Uncles Hans (Marcella) and Carl Raffel and Granny (Anna) Raffel all predeceased.  Also predeceased by his good dog, Ripper.
Steve and Lori have been extremely blessed to have had our wonderful family, friends and neighbours swoop in and circle us with their love and support over the last eight months.  We are grateful for Dr. Warren Bell, the nursing staff at both Vancouver General Hospital and Shuswap Lake General Hospital and GF Strong’s rehab team.  We have great love for each and everyone one of you.  No service at his request.  Soar high Stephen. 💗
Stephen was concerned about world conservation, wildlife and our role in being good stewards of our beautiful earth.  Donations in his memory may be made to: https://donate.nationalgeographic.org/donate

“In the end, it’s not going to matter how many breaths you took, but how many moments took your breath away”  Shing Xiong