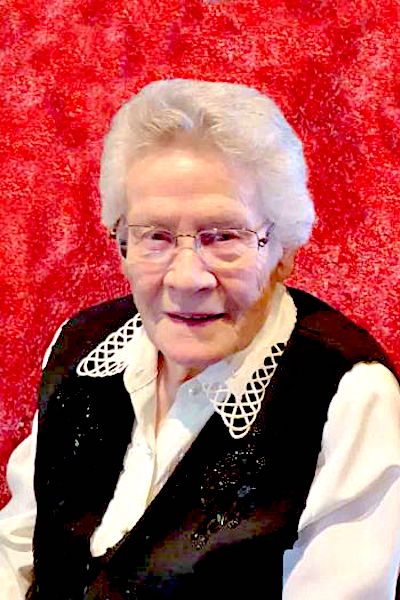 Pearl wrote this to be her obituary.

Pearl Lucille Read was born to Richard and Harriet Fitzpatrick at Barrhead, AB on November 19, 1927. The family moved to a farm near Irma, Alberta, then in 1934 we moved to a “Homestead” south of Bonnyville, Alberta. The whole family worked hard to develop raw timberland into a farm. Somehow, we survived. Our milk cows being our mainstay. Older brothers and sisters worked very hard but our Dad and Mother were very good managers and very talented when it came to growing a garden or building something. My Dad played the fiddle and at an early age I said that someday I was going to play the fiddle. In my late teens I self-taught and did it, as did two of my brothers George and Ivan. I played with the band for dances in old schoolhouses and house parties. Whenever I got paid, I gave Mother half of it. We only got about $6 for 6 hours of playing so Mother got $3.

In 1949, while working at Duclos Mission Home, I met Lorne Read and in December of 1950 we got Married in Wainwright Alberta. We built a house and Lorne got a job with the CNR Express office. Four years later that office closed, and we moved to Saskatchewan. Lorne owned some land there, which we farmed and Lorne also worked 31 years for Interprovincial Pipeline. We retired to Sicamous in 1990 and began to enjoy retired life with many trips back to the farm. We played music for the birthday lunches and enjoyed singing in the Choristers. After Lorne passed away life just wasn’t the same but, with many friends around the music continued. I lived in our house for as long as I could keep up, but my health made the decision for me to move into a retirement living apartment in Salmon Arm.

So, this is the dash between the dates. It has been a heck of a good ride.