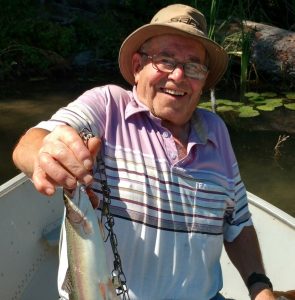 It is with deep sadness that we announce the loss of a husband, father, grandfather and dear friend at the age of 84.
Douglas Raymond Ricketts, born February 8, 1936 in Mullingar, Sask.  In 1972 he relocated to Princeton to raise his three boys Ian, David and Ross. Here he enjoyed camping and the great outdoors.  Making his living as a welder with the Similkameen Mining Company, Doug was proud of his work and known for doing things one way only, the right way, Doug’s way!
Doug was a valued member of the community, who couldn’t say no when asked for help by anyone.  This man with a big heart walked his age in km to raise money for the Heart & Stroke Foundation on each of his 67, 68 and 69th birthdays. He was a long-time supporter of minor hockey and the Lions Club.  Doug was the life of the party with his harmonica in hand, he was a storyteller, and a darn lucky fisherman. He was known to family and friends for his candid and humorous outlook on life and his dedication to those he loved.
Doug peacefully passed on January 6th, 2020 surrounded by family, leaving behind his wife Kathy, sons Ian (Rita), David (Peggy), step daughters Joyce, Bridget (Steve), Michele (Bob), sister in law Judy, his grandchildren Marcus, Kurtis, Taylor, Jordan, Stephen, Jarrod, Miranda, Ashly and Joseph, as well as his 13 great grandchildren.  He was predeceased by brother Miles and beloved son Ross.
The family would like to thank Vermillion Court, Ridgewood and the staff at Polson extended care for their love and care of our Doug.
In lieu of flowers please donate to Alzheimer’s society.  Cards of sympathy can be sent to 2309 33 Street, Vernon, BC   V1T 5S4
Celebration of life will be held at the Senior Center, 162 Angela Avenue, Princeton, BC at a later date.