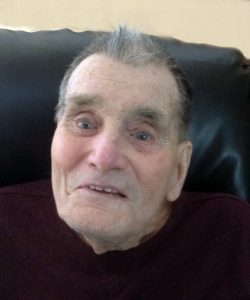 Lawrence Walter Sanderson passed away June 18, 2019 at the age of 94 at his home in Shuswap Lake Estates, BC
Walt was born December 28th, 1924 in Taber, Alberta.  He lived and worked in Calgary for many years, prior to moving to Anglemont in 1992, where he built our home from the ground up.  He lived a happy and healthy life, always the gentleman and was loved by all he came in touch with.  He always had a kind word and smile for everyone.
Walt was predeceased by his daughter Carolyn (Mike), Roselyn and son Bob (Gloria).   He leaves his loving wife, Nadene, his children, Marilyn, Linda (Herb), Gerry (Debbie), Betty (Geoff), Wayne (Bev), Geri (John), Cheryl (Shawn), Laurie (Brad), Dave (Cathy), Sandra, Vic Smith and many grandchildren, great grandchildren, nieces and nephews.
We were truly blessed to have had him with us for so many years.
He will be greatly missed by family, friends and especially his wife, Nadene.  Rest in Peace, my Love.