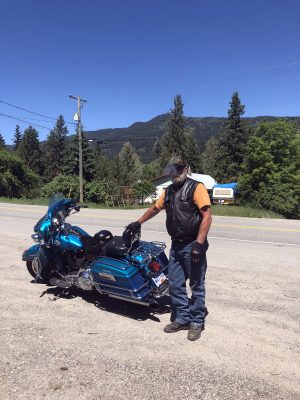 Doug was born in Porcupine Plains, SK as the second son of Ina and Beverly.  Doug passed away at the age of 62 in Salmon Arm, BC with his wife Angela of 41 years and his loyal companion Bella.  He fought a short and courageous battle with cancer and kept a positive attitude.

He is survived by the love of his life wife Angela and companion Bella, brothers Gary (Lana) Goodman, Robert (Dorthe), Darryl, Clayton (Lori), sister Lori and many nieces and nephews as well as his large extended family and friends.  He was predeceased by his parents Ina and Bev, sister Carolyn and nephew Thomas.

Doug’s passions were hunting, fishing, family, stockcar racing and his love of the big open road on his motorcycle Big Blue with Angela by his side.  He will ride the open road forever.

No service by his request.  Any donations can be made in his honour to a charity of your choice.