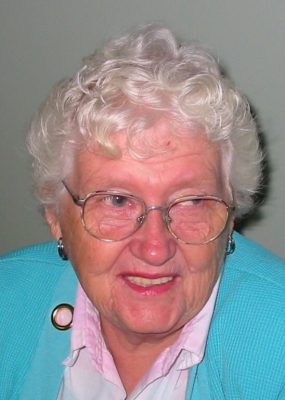 Mom was born on May 8, 1933 in Waskateneau, Alberta, a sister for her older brother Cecil. After the tragic loss of their mother Ella, Mom and her siblings which now included baby sister Lynne went to live with various family members on both sides but it was with Auntie Viv and Uncle Wally Trenholm she remembered most fondly. Blue eyes, blond hair and a fiery temperament described mom to a tee as anyone foolish enough to tease her soon found the error of their ways. As a young teenager Mom moved to Edmonton and worked in a bakery but eventually found herself back in rural Alberta where she met the love of her life, Jim Smith, a handsome guitar picker and jack of all trades. At ages 17 and 18 they married in 1950 and began raising a large family. Ken, Doug, Carol, Wally, Sandy, Kathy, and finally Robert and Allen after moving west to Salmon Arm from North Bay, Ontario.

Perhaps it was because Mom was deprived of her own mother at a young age that doing whatever was needed, and raising kids was what she loved most which also included taking care of other people’s kids too. Her beautiful blond hair started to turn grey very early perhaps because of nature but most likely it was raising all those rambunctious boys that were always in need of first aid. Capable of practically anything she put her mind to this also included sewing the leg back on an injured piglet while brother Allen held the squirming critter. She never lost her fiery temperament but she also had a kind heart that defended the helpless whether man or beast:  starving rescued pigs, footless roosters, foundered donkeys and a louse ridden grouse knew the depths of her compassion for helpless creatures. Mom’s artistic abilities were naturally numerous and besides helping others she loved growing a garden, her fishpond and Murdoch mysteries.

Most of all Mom loved our Dad intensely and in fact celebrated seventy years of marriage before Dad’s passing last October. With brother Rob at her side, Mom slipped away peacefully to rejoin the person that she was always meant to be with.  You were a good Mom under some tough times and stood up for kids and animals alike and now it’s time to rest but if it’s possible I just bet you’re somewhere feeding a donkey or two or making dad pancakes.