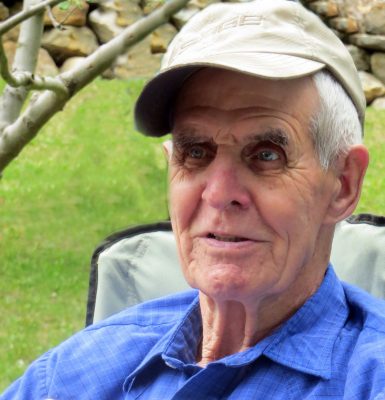 A celebration of Dad’s life will be held at Carlin Hall, in the near future, when public health allows it.

Jim as everyone knew him was born on the homestead in Meadow Lake, SK, the second in a family of seven kids to Thelma and Merritt Smith. No stranger to hard work, at 14 Dad was forced to quit school and work in the lumber camps to support the family after Granddad suffered a broken back. Dad met Irene Shepherd and married her in August of 1950. The marriage was fruitful as Mom gave birth to eight children in 11 years beginning with Kenneth, Douglas, Carolyn, Wallace, Alexander, Kathy, Robert and finally Allen.

Sad times befell our family with the loss of Sandy so they decided in 1961 to move to Salmon Arm from our home in Ontario. Dad always was a competent and confident man, never one to back down from a challenge. He constructed a plywood camper for our half ton and we drove 3600 kilometers with three boys in the back, Carol and baby Kathy up front with Dad and Mom carrying Rob.

Dad went to work logging to feed all those mouths plus brother Allen. A grader man back in Ontario, it was probably there that his love of all things Caterpillar yellow began. Our front yard was always adorned with some piece of equipment and it was in this element of machines and freshly turned dirt that Dad was happiest. His perennial scrap pile from which the most wondrous devices were built using salvage metal and repurposed thingamajigs was how Dad taught us the value of hard work, ingenuity and creativity.

He worked as a log scaler, welder, Millwright and carpenter over the years in addition to owning and operating numerous pieces of heavy yellow equipment.

Playing guitar since a young lad, it gave him great delight to play aside his grandson Colin at the Carlin Hall coffee houses. Dad was a prime reason that the Carlin Hall was relocated rather than demolished as he and Mom, along with other community volunteers, worked very hard to ensure this historic building remained a vital center for the community which he had been a part of since 1962.

Too many years of hard work and injury took its toll on his mobility, so he quit running grader in his late seventies to concentrate on raising animals, but he still managed to repurpose metal into useful machines.

Always joined at the hip and the heart, he and Mom celebrated their 70th anniversary this past August.  The only thing Dad loved more than Caterpillar yellow was our Mom so it was only fitting that she and others from our family were with Dad as he gently slipped away from a life well lived in a community of people that respected and valued his contributions to so many others.

Dad, you did a good job of raising and providing for us and now its time to take a rest but I can’t help thinking you are pushing a road somewhere, diesel smoke in your face and the sound of creaking tracks in your ears waiting for Irene to cook you up some pancakes.