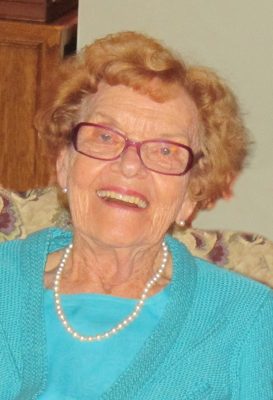 Vivian Olivia Alexander Smith passed on May 18th, at the age of 102.

Born in Kingston, Ontario to loving parents Gertrude and Raymond Farley, Vivian was close with her sister Flora June throughout her life. The sisters shared a love of travel, but were equally content with an afternoon of Scrabble on the deck. They were known, on occasion, to make each other laugh to a point of needing a chair to keep from tumbling over.

Vivian spent her childhood in Kingston before attending Queen’s University, located on her doorstep. She majored in both English and History. It was at Queen’s that Vivian met her husband (Russell) John Alexander, a medical student. After graduation, marriage, and John’s time spent in the service, the couple moved to Kamloops with their first two children.

Vivian and John provided a carefree childhood for their children, filled with happy memories of time spent at the family cabin on Shuswap Lake.

Sadly, John passed far too soon.  Vivian then returned to university, where she obtained a teaching degree.  She taught business subjects at SASH for several years.

Vivian and Jack retired to build a home on Shuswap Lake at the site of the cabin that created so many happy memories for her children.  All Vivian’s grandchildren have great memories of childhood summers spent swimming and enjoying campfires on the beach. Shuswap Lake will forever be known to those close to Vivian as “Grandma’s Lake“.

Vivian enjoyed needlework, sewing, and knitting throughout her life. She exercised her lively mind with countless jigsaw and crossword puzzles. A superb cook, she was renowned for her pies and baking, which were anticipated by all guests. She spent many happy hours playing bridge.

Vivian loved the community of Salmon Arm, and brought her generous spirit to countless church and community causes over the years. Vivian was fortunate to maintain an independent lifestyle until her final years, even passing her driver’s test in her nineties.

Vivian’s entire family wants to thank all the incredible caregivers at Shuswap Lodge and at Hillside Cottage One for giving Vivian comfort in her later years.

Vivian was buried in a private ceremony and a memorial service will be held when restrictions allow.