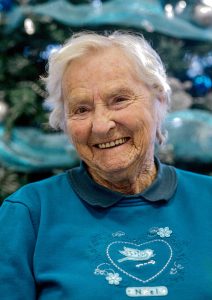 June was born and raised in New Westminster, BC.  It was there that she met Doug and married October 7, 1950 celebrating 60 years together before Doug passed away.  They lived in a couple of communities before their move to Salmon Arm in 1965.  June worked assisting Doug with his business, raising children and retiring from the local Post Office.
June had many interests over the years including golfing, bowling, playing crib, knitting and cheering on the Vancouver Canucks and Toronto Blue Jays.
June was predeceased by her parents, brother Bruce and (Nora), two nieces, two nephews and husband Doug in 2011.  June leaves behind to mourn her passing five children:  Willie (Lucy), Beth (Perry Phillips), Bruce, Joe (Gloria), David (Conny), seven grandchildren, six great grandchildren as well as numerous nieces and nephews.
June’s family would like to thank the staff at Shuswap Lodge, Pioneer Lodge and Bastion Place for all the wonderful care provided to June and Doug over the years.
June requested that there be no service.  If you wish to make a donation, June supported the Diabetes (Diabetes Canada, PO Box 1224, Stn. K, Toronto, ON, M4P 9Z9) and Parkinson’s Associations (Parkinson Society British Columbia, 600-890 West Pender Street, Vancouver, BC, V6C 1J9)