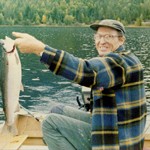 He was predeceased by his wife Bonnie, two sons, Ron and Bob and two grandsons Bill and Cole.  He is survived by his daughter Carol (Doug) Aldcroft and son Bill (Glenda) Taylor, nine grandchildren and ten great grandchildren.

Dad was born in Port Coquitlam and moved to Notch Hill in 1975 and worked in Construction in Salmon Arm.

We wish to thank Dr. Stacey Kirkman and the staff at Mt. Ida Mews.

By dad’s request, no service will be held.