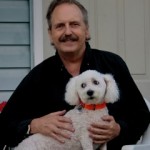 Much of his childhood was spent on the family ranch in the Chilcotin, and later in adulthood, with his family in the Nimpo/Anahim Lake area. A real outdoorsman, his passions, were hunting and fishing, woodworking and teaching, though in later years inhibited by multiple disabilities. He taught Core Hunting classes, along with Firearm Safety and Wilderness Survival, for two years in Abbotsford and in Clearwater, BC. He was gifted in sales work and in teaching, both of which he did before his disabilities prevented that. He loved family, friends and his dog, Benny, his constant companion and friend—a true “care dog”. He suffered many years of pain and difficulties, but always kept his faith in God, all the more so as his suffering worsened. He had attended Broadview Church in Salmon Arm when physically able, but in later years was unable to do so. He passed away peacefully in Vancouver General Hospital, surrounded by his five children, his parents, one brother and one sister-in-law. Our very dear son, father, brother and friend—you are now in the arms of Jesus—no more suffering—how glorious!

Internment with family and friends: Saturday, June 7, at 11:00 AM, St. Mary’s Anglican Church Cemetery in Sorrento.

In lieu of flowers, donations can be made to Shuswap Hospital Foundation, Box 265, Salmon Arm, VIE 4N3.