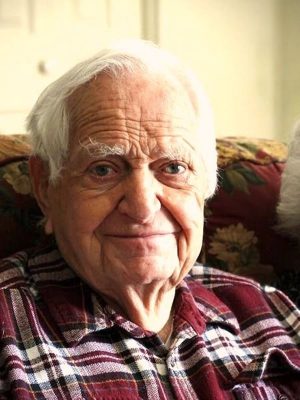 A Celebration of Life will be held at River of Life Church in Blind Bay on August 11, at 1:00 pm. following his internment with family and friends:

Irvin A. Thomson of Blind Bay, BC is better known as much-loved “Grandpa” by his 13 grandchildren, 25 great-grandchildren and 10 great-greats, “Dad” by his two living sons, Randy and Gregory and wife Angela, and deceased son Geoffrey. His beloved little dog, Benny, also knew him as “Grandpa”. He loved people and was loved in return by those who knew him as “Irv”. He passed away on July 24 at the age of 95 at Shuswap Lake General Hospital.

Irvin was born and raised by Canadian parents in California with his 7 siblings, married Avalon Colbert in Nevada and subsequently brought his young family to Canada in 1957 on a touring trip, only to fall in love with Beautiful BC. In 1959, they returned and purchased a ranch property in the Chilcotin. Developing the ranch, he enjoyed the challenges which included fishing, hunting and the outdoor lifestyle that was just right for him and his family. Eventually leaving ranch life, he returned to his former trade as an electrical contractor, helping to electrify the Chilcotin Road as power was brought in. The next challenge was a café in Nimpo Lake where he designed and built a motel next door. After 12 years there, he retired, spent one year in Calgary, then back to BC buying a small acreage in Darfield where they spent another 13 years before a move in 2003 to the most wonderful retirement place—Blind Bay—which has been Irv’s home for almost 20 years—the perfect ending!

After Irv suffered a stroke on July 4 and then other complications, his wife of 79 years with several of his grandchildren and other family from many places across Canada gathered daily in Shuswap Lake General Hospital to be with him during his final 3 weeks. Our sincere gratitude to all of the wonderful doctors and nurses for the devoted and great care given to Irv. A Celebration of Life will be held at River of Life Church in Blind Bay on August 11, at 1:00 pm. following his internment with family and friends.

“Thank you, my dear husband of 79 years for those wonderful times in recent days of reminiscing about the life that God has favored us with, the family He has given to us, and most of all, knowing Jesus together and following Him. You are in my heart forever.”

In lieu of flowers, you may donate to Shuswap Lake General Hospital.