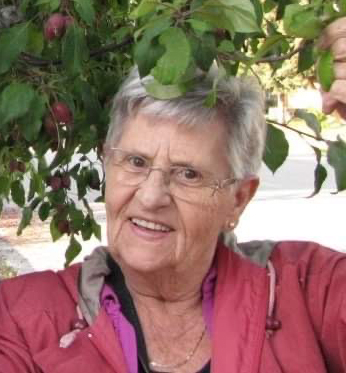 “And do not forget to do good and to share with others, for with such sacrifices God is pleased.”
Hebrews 13:16

Gerarda (Gerda) Van Der Zweep (previously der Kinderen), born Gerarda Janssen in Venray, Netherlands on April 8, 1937, passed away on Saturday, March 14, 2020 in Salmon Arm, BC, at the age of 82.  She is survived by her two daughters, Astrid (Carlo) Eberle and Monique (Texas) Peck, six grandchildren and six great-grandchildren, as well as her husband Eling (Ed) Van Der Zweep and his children and grandchildren.  She is also survived by one brother and two sisters and many nieces and nephews, as well as several close friends, residing in Holland.

Gerda was born the second twin after her brother, Antoon.  Their unique bond and rascally adventures as children remained a defining characteristic and the description “rascal” suited her throughout her life.  She was always up for anything.

She was an athletic woman in her youth, playing European handball in Holland where she met her first husband, Dili.  At the age of 39, she embarked on the greatest adventure of her life, moving from Holland to Prince George, BC, Canada with her husband and two daughters, then aged 14 and 9.  Remarkably, they found other Europeans interested in putting together a European handball league and she continued her legacy in the sport, taking the Prince George team to bronze and silver medal victories at the Canadian National Handball Championships in consecutive years.

A year after Dili passed away following a battle with lung cancer in 1996, Gerda moved to Salmon Arm, BC.  She instantly fell in love with the community and immersed herself in volunteer activities.  Gerda was a “doer”.  Whether cooking for the soup kitchen, visiting and volunteering at care homes, working at Church’s Thrift Store, collecting clothing, or knitting and quilting for donation to various organizations, she always had several causes on the go.  She prided herself in giving and always led by example.

Gerda was blessed with a second chance at love and at the age of 69, married Ed Van Der Zweep and they shared more than 13 special years together.

She built meaningful friendships throughout her life and after marrying Ed, fostered special bonds with each of his children and grandchildren.  To many of his grandchildren, she was simply “Oma” and she filled that role with dedication and intention.

Gerda will be missed by many, in her home community and beyond, by family by birth and family by extension, by organizations she can no longer be a part of and a church family where her absence creates a notable void.

Due to the current situation, a service will not be held at this time.  As soon as it is safe to do so, a church service will be arranged and a gathering to share our special memories of Gerda will be held.