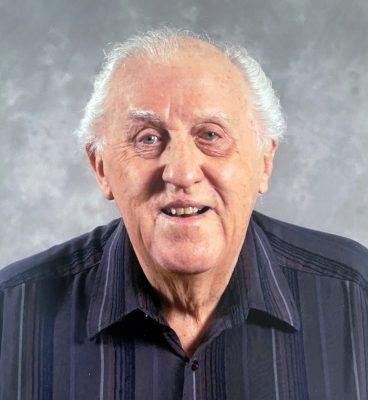 Frank was born March 17, 1935 in London, ON and left us on July 30, 2021. He is survived by his wife Katie(nee Uren), daughter Bev(Doug) Lillooet, BC, son Jeff(Susan) Phoenix, AZ, brother John of Innisfil, ON,  grandchildren Chris(Melissa)-Lillooet, BC, Devon-Lillooet BC, Jenna-AZ, Jessica-AZ, great grandchildren:  Hunter, Harper and Annalise(Annie)-Lillooet, BC, nephews:  Mike(Kelly), Richard(Jill) and Jim, niece Carrie(Ted) and their families in Ontario.

He was predeceased by his parents Charlie and Mabel Walters, brother Charlie, mother in law Frances Uren, father in law Norman Uren and sister in laws Nancy, May and Norma, and his special golden lab Sandy.

Frank graduated from South Collegiate High School in London, ON in 1955, he went on to Haileybury School of Mines from 1955-57. He worked underground in Sudbury and ended up in exploration work gaining and becoming a licensed pilot to support this work. He was in Labrador City, NL from 1960-65 and during this time married Katie on Dec 22, 1962. They moved to BC and he worked for Jedway Iron Ore on the Queen Charlotte Islands and for Brenda Mine in Peachland. Mining took him into becoming a blasting expert and this led the family to Peru, South America from 1969-72, back to AB to McIntyre Coal Mine in Grande Cache, back to South America in 74 and settling on Texada Island at the Blubber Bay Quarry. They retired to Salmon Arm in 1995 but ever restless to move they went to Oliver, Osoyoos and finally settling back in Salmon Arm in 2017.

Frank was an avid sportsman in his youth and refereed University and High School basketball and football, he was a fisherman, he always had a garden and plants anywhere he lived and he was also a war buff spending many hours reading and watching shows in his later years when his health did not allow him to be as mobile.

The family wishes to thank: the super, wonderful staff, loving friends and Franks “other girlfriends” at Piccadilly Terrace for making his last two years in a wheelchair the best they could be, the staff from Interior Health Home Support who took loving care of him every morning, the staff from Home Health in Salmon Arm, the staff on the 4th floor of the Shuswap Lake General Hospital and a special thanks to Dr. Mike Skubiak for his care and attention over the past 26 years as well as the staff at the Bank of Nova Scotia – Lisa, Vince and Tammy for their compassion and always taking the time for his calls.

Frank was cremated as per his wishes and a family celebration will occur at a later date; again as per his wishes. In lieu of flowers please donate in his name to the Shuswap Hospital Foundation.