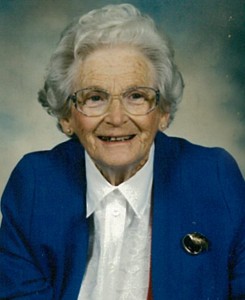 Mary Jean (nee Murdoch) Sinclair Watson passed away peacefully Feb.25, 2014 at Bastion Place, she was 103.
Jean, as she was called, was predeceased by George Sinclair in 1943 and Dave Watson in 1988. She is survived by son Donald Sinclair and daughter Isabel Sinclair, grandchildren Doug Sinclair, Kelsey (Sinclair) Norlin and Megan (Sinclair) Frances and six great-grandchildren.
Jean was born in Markdale, Ont. in 1910 to Emeline and Arthur Murdoch. Her father enjoyed all things Scottish and ordered kilts form Scotland for his children, later Don and Isabel would wear them as well. Mother loved music and was given a Steinway piano for her twelfth birthday, the piano would figure largely in her life. She also loved the pipes and we would have a piper, the masterful Jim Wright, at her birthdays form age 90 on.
Jean wanted to be a teacher but her father wanted her to be a nurse. She graduated from U.B.C. Nursing program with a class of seven women in 1933. While Jean was playing the piano at a U.B.C. dance George Sinclair, president of his engineering class, came over and introduced himself. Upon graduation Jean worked as a Public Health nurse in Vancouver. George and Jean were engaged for four years waiting for him to become employed. They were married Aug.10, 1938 at The Canadian Memorial Church in Vancouver. Family friend and founder George Fallis Sr. officiated at their marriage.
After marriage George and Jean moved to Wells, B.C. where George was employed as a mining engineer. Jean’s two children Don and Isabel were born there in 1941 and 1943. George was tragically killed in a mining accident on Aug.24, 1943.
Both Jean’s parents, had passed on before she was twenty, one of TB the other of cancer, so at this time Jean’s father-in-law Donald (Dan) Sinclair invited her and the children to come and live with him. He had homesteaded 320 acres on Lakeshore Rd. in 1894 which he cleared with Clydesdale horses. Dan was a member of the first Salmon Arm Council. Later Jean built her own home just below Dan’s house.
After moving to her new home she ran a kindergarten out of her basement for a number of years, later she worked as a nurse in Dr. Bennett’s office.
Jean was involved in many local groups, The United Church (she played the piano for the Sunday School), The Eastern Star, Rainbow Singers, Senior’s Club, and The Horticultural Society. She also attended the Symphony and Les Ellenor’s literature series at Okanagan College. She enjoyed bridge, whist and in later years, rummy.
She loved flowers and also giving them away (and giving things away in general), she often would go to the farmer’s market and fill her scooter basket up with flowers and drive up to Pioneer Lodge to give them to the residents. She enjoyed picking flowers around Bastion and nearby, usually with permission, and to give them away as well. She loved to take her friends for drives in her badly battered car. She was infamous for her lack of good driving habits but, although she once wiped out the ICBC office window or was it Wee Willie’s, or both, she never had a serious accident. Also, an indication of her durability was that after her third hip fracture her doctors told us she would likely not survive for more than six months (it would be another 9 years).
She was generous with her time and possessions and donated to local charities. When a South African family who had moved here lost their home in a fire she invited them to come and live at her house.
She met Dave Watson who shared an interest in horticulture and they were married in 1978. They had trips to the Caribbean, Hawaii and England to visit Isabel, Scotland, and Holland for the tulips. Dave passed in 1988 and Jean moved into an apartment and then later to assisted living in 2002.
After breaking her hip for a third time she moved in 2005 to Bastion Place where she was exceeding well cared for. The family is grateful that she could spend her last years there and wish to thank the Bastion staff and volunteers for their many kindnesses.
She was out-going and known for her smile and her memory.
She was also notorious for driving her scooter. A limerick written by her son for her 90th birthday goes like this:
Granny turns ninety today
Granny turns ninety today
And everyone’s happy to say
Her car’s off the road
But like Mr. Toad
When she hops on her scooter
We pray.
Jean led a courageous and inquisitive life and will be missed.
A Celebration of Life will take place at The United Church, Sat. May 31, 2014 @1pm (she would have been 104 on May, 27).