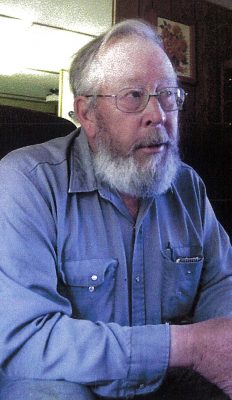 Eric Ole Widmark passed away Wednesday, January 27, 2021 at the age of 76 years.
Eric was born October 1, 1944 to Walter and Mary in Enderby, BC.  He spent the majority of his life in and around the Mabel Lake Valley, the last 38 years on the farm.  Eric was a well known member of the community with his endless jokes and antics.  He always had a story to tell.
Eric married Joyce in August of 1968 and they had three daughters while living in Kingfisher, Prince George and Ashton Creek.
He worked on a ranch in Prince George in the 60’s and was a faller, fabricator, truck driver and mill operator in the following years up to 2002 when he sold his mill and semi-retired.  He then worked part-time for Wood-Mizer delivery mills and offering training sessions.  In 2013 we opened Widmark Farmacy and Eric returned to work full-time as the resident greeter.
Eric was predeceased by both parents and two sisters Ada and Joyce.  He leaves behind his loving wife of 52 years Joyce, daughters Michelle (Ben), Rena (Joe), Cathy (Anthony), grandchildren Allison, Jolene, Kelly, Ashton, Spencer, Radly and Remi, two great grandchildren Izaiah and Aedan as well as numerous nieces, nephews and extended family.
Service to be held at a later date.