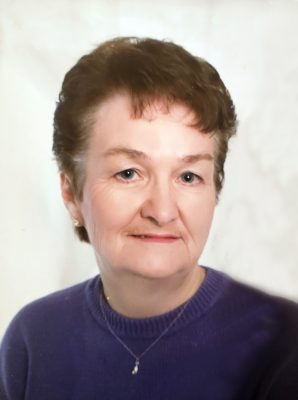 It is with heavy hearts that we announce the passing of Gloria Rose Appel on November 30, 2020 at 79 years old in Salmon Arm, BC.

Gloria was born in Regina, SK to Anthony and Tilley Coones in 1941.  Gloria was predeceased by her older sisters Georgina Collins, June King and her younger brother Robert Coones.  She is now reunited with her oldest sister Joyce Agar and her baby brother Anthony Coones.

Gloria was a very strong and intelligent woman who could conquer anything she put her mind to. She had to be busy all the time and she was the strength of the household.

Gloria married Jack Appel in 1959 and raised her family in Regina and Melville, SK before moving to Calgary, AB in 1969 where she had many friends and loved playing cards. She was very involved in the community and was president of the BCRA.  Gloria owned her own ceramic shop and was very artistic.  Jack and Gloria owned Punky’s Pizza before retiring in Canoe, BC in 1989.  Gloria got involved with the Seniors Association and volunteered at the Church’s Thrift Store in Salmon Arm for many years.  Her greatest pleasures were gardening, painting, puzzles, woodwork, bingo, bowling and sewing.

Gloria will be deeply missed and forever in our hearts. We would like to thank Father Dale for the prayers given to Gloria and Fischer’s Funeral Home for providing us with a peace of mind through this painful situation.

Family and friends may contact the residence for further information regarding a small gathering to celebrate and honour Gloria Appel.