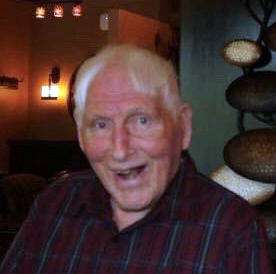 Clifford James Bear was born August 27th, 1932 at the Bear family farm near Veregin, Saskatchewan. He was the sixth and youngest son of George and Emily Bear. He attended public school in Veregin.
Clifford farmed with his family in Veregin until 1955 when he moved north of Whitebeech to the Woody River area of Saskatchewan. There he helped found and establish Woody River Coop Farm with his brothers Roy, Ernie and Walter Bear as well as 6 other non-family members. Later the brothers bought out the other members and Coop Farm became Bear family owned.
In 1962 Clifford met his future wife, Josephine Brown, at a community dance in Kenville, Manitoba. They were married on August 6, 1966 in Kenville United Church after Josephine finished Teacher’s College in Winnipeg.
After their marriage, Clifford and Josephine lived in Swan River, Manitoba where their daughter and only child, Donna-Lee, was born in 1968. They moved back to the farm in Woody River in 1974. Clifford was an active community member in the Whitebeech area and built lifelong friendships with neighbours. especially with Arnold Bartok and family who were frequent skidooing, fishing, and camping companions.
Cliff was also politically active in the National Farmer’s Union and Co-op Implements for many years. He was also a member of the CCF and later the NDP. He went on many marches and rallies for issues like Medicare and the Crow Rate. He was especially interested in farming issues.
In 1989 Clifford and Josephine retired from farming and relocated to Salmon Arm, BC. They took up farming on a smaller scale and kept busy with a large yard and garden. Clifford had a spacious shop where he worked on various wood working projects in the winter. The Bears formed close friendships with other Manitoba/BC transplants and Salmon Arm residents. They went on several camping trips around BC and Alaska with family, old friends and new. They spent September and October 2001 touring Australia and New Zealand in an RV with Les and Bev Holmes. A trip that Clifford very much enjoyed and cherished.
Clifford became a grandfather 4 times over with the birth of his granddaughters. He enjoyed their visits to the acreage and spent much time teaching them to garden and ride bikes. They also spent hours riding the lawn mower with their Grandpa cutting grass.
In 2014 Clifford and Josephine decided to down-size and bought a house with a wonderful view of Shuswap Lake. Clifford lived there for the remainder of his life watching the boats and wildlife out on the lake – which he found entertaining.
Clifford passed away peacefully in the Salmon Arm hospital on April 28th, 2020. He is survived by his wife Josephine of 53 years, daughter Donna-Lee (Thomas Halbert) and his four grandchildren Brenna, Aeryn, Zoe and Rhylynn Halbert. He is also survived by his brother Bob (Betty) and sister in laws Pauline Bear and Betty Fedorak and numerous nephews and nieces. He is predeceased by his parents, George and Emily Bear, his brothers Ernie, Walter, Roy, and Herb and his sister in law Ruby Bear.
Clifford enjoyed life and lived it mostly with a grin on his face.