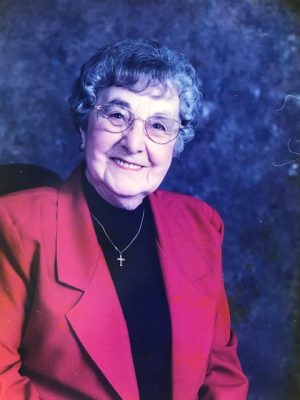 It is with profound sadness that the family of Helga Burdeniuk announces her passing at Hillside Village in Salmon Arm, BC on September 12, 2021.  Helga was predeceased by her husband John in 2009, and by her 15 siblings, 4 who died in infancy.  Helga is survived by her three sons Ernest (Cathy), Eugene (Robyn) & Dwayne (Liz),7 grandchildren & 7 great grandchildren.

Helga was born on her family farm near Elfros, Saskatchewan in August of 1923 to Michael and Dorothy (Syrota) Pidperyhora. The large family of 7 boys and 5 girls worked hard on the farm and Helga often spoke about her and her sisters looking after the animals and making meals for their brothers working in the fields.

In 1945 Helga married John and easily took on the job of the wife of a farmer near Weekes, Sk.  They later left the farm and moved with their 3 boys to Choiceland, SK where they owned Johnny’s Esso. There, Helga ran the restaurant where people traveled from near and far for her famous pies.

The family moved to Merritt in 1967 to run the MacLeod’s store. It wasn’t long before both John and Helga became well known in the community. As part of her busy life, Helga was involved for many years with the Royal Purple and Catholic Women’s League. Her baking and delicious Ukrainian dishes were always the first to go at events hosted by these groups.

When John sold the MacLeod’s store, Helga went to work at Fields in Merritt, where she made many life-long friends.   Throughout her life, Helga was always busy. Her love of gardening, canning, baking, and cooking for friends and family gave her the most joy.

In 2007, John and Helga moved into Nicola Meadows in Merritt and after John’s passing, Helga had many happy years there.  In the middle of the Covid-19 pandemic, Helga’s health started to deteriorate and as a result she moved into Hillside Village Long Term Care in Salmon Arm. She settled in well there and was well loved and well cared for by the staff of Cottage 6.

Helga will be sorely missed and lovingly remembered by her family and all who knew her.

A celebration of life will be held at a future date.