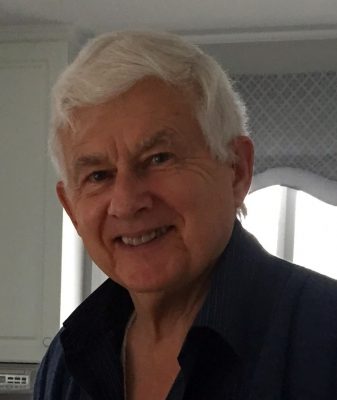 With hearts broken into splinters, we, the family of John Benson Casteel announce his passing on 1 July, 2022 in the Marjorie Willoughby Hospice, Kamloops, B. C.

John was born on 28 October, 1942, to Arthur & Grace Casteel in Oakwood, Illinois, USA.  He grew up and attended school in Oakwood, Illinois, graduating from high school in 1958.  After obtaining a Bachelor of Science degree from University of Southern Illinois, he attended Yale University in New Haven, Connecticut, graduating with a Masters in Forest Management.  After working in the forests of Norway and Finland for a couple of years, his sense of duty directed him to return to the US, and enlist in the US Navy.  He spent 6 years serving his country.  Two years in the US Airforce Reserve (ROTC), and 4 years, in the US Navy, including 18 months serving in Vietnam during that conflict.  On receiving an honorable discharge in October of 1968, he married Bernice Mogusson, and together they travelled across Canada until he found employment with Lakeland Mills in northern B. C.    In 1971, their only child, daughter Diane, was born in Prince George, B. C.

In early 1989, he found himself alone again, and in the fall of 1991, he married his soul mate Bernice E. Atherton (nee Johnson).  After their retirement in 2002, they moved to Chase where John enjoyed his large garden, happy to give produce to his family, neighbors, friends, church family, and anyone who needed it.  John & Bernice travelled extensively to Australia, England, Norway, Hawaii, the midwestern United States, eastern Canada, and Cuba.  They spent 14 winters at their park model home in Sun Vista Resort, Yuma, Arizona, where John served as head usher at the community church in the park for several winters, led the Investment Club, and enjoyed his nightly bike ride around the park.

A quiet person by nature, yet John loved to discuss politics, economics, philosophy, philanthropy, and the stock market with anyone he met.  He had a very strong faith, and read his Bible every morning with out fail.  At the time of his passing, he had served as Chairman of the Board of the E. Free Church in Chase.

He was predeceased by his parents, and survived by his loving wife, Bernice, daughter Diane Casteel; step-children Todd Atherton, Betty-Ann Atherton (Carlo Rossetti), grandson Brandon Atherton (Jill Maisonneuve), an expected great-granddaughter in early October and nephews Blair and Ripley Martin.  Also survived by his Johnson in-laws: Jim Johnson (Elaine), Doug Johnson (Shirley) and Chelsea Braaten (Vern); as well as his Casteel and Arnold cousins in Illinois, Colorado, and Florida in the USA, He will be sorely missed by all of us.

We would like to extend heartfelt thanks to Dr. S. Swart, and his nurse, Dominique, Dr. De Villiers, the Chase Palliative Care nurses Shanoa, Kamilla, Sara, and Laura, and the caring staff at the Marjorie Willoughby Hospice…you have all supported for us through this painful journey, and we appreciate your efforts.

In lieu of flowers, donations to the B. C. Cancer Society, or the Marjorie Willoughby Hospice in Kamloops would be very appreciated.