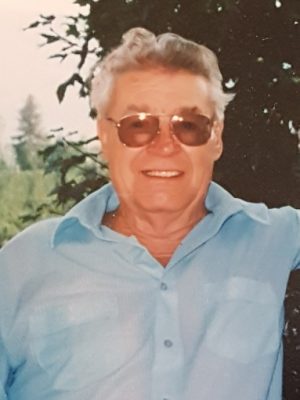 It is with deep sadness that we announce the peaceful passing of our father William Ronald Edwards on March 19, 2021 at the age of 97.

He was born on September 3, 1923, in Korah Township, Ontario to William Edwards and Mary Ethel (Moore).

Dad had quite the life; he enlisted in the New Westminster Regiment in 1942 and spent four years serving his country. He was awarded the 1939-1945 Star, the Italy Star, the France & Germany Star and the Canadian Volunteer Service Medal & Clasp for his dedication and valor while fighting overseas. Upon his discharge in 1946 he moved to New Westminster and started his career at Labatt’s Brewery. He met his future wife; Ruth at the Honey Dew Café in New Westminster and they were soon married. They moved to a small acreage in Surrey where they raised their four children, some chickens, a couple of pigs and a small flock of sheep and mean cow called Judy. They had great fun attending many dances, they loved their bowling and of course they were busy with all the kid’s events. When dad retired, they moved to Gardom Lake, BC and lived there many years gardening and raising sheep and chickens. When the acreage got too big for them, they downsized into Salmon Arm, now they had time for the bus tours that both mom and dad enjoyed. Dad loved to walk and he loved to talk. He would gab to anyone he came upon whether he knew them or not. Mom and dad loved to golf and they loved camping especially with their little dog Yogi. Ten years ago, dad was diagnosed with dementia, so we moved him into Piccadilly Care Facility in Salmon Arm so he could receive the care he needed. Before the dementia got really bad mom would go over and they would play crib and if the weather was nice, she would take him out for walks. Now they can continue all of those things they loved together once again.

Bill’s family would like to thank the staff at Piccadilly Care Facility and a special thanks to the nurses and care aides in the Aberdeen neighborhood (ward) that took care of our dad over the last ten years, your amazing dedication to the care and attention you gave him was greatly appreciated.

Dad lived a long life and will be greatly missed.