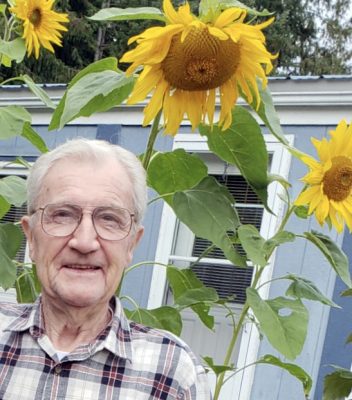 AKA Mr. Mike (to the kids) or the Candy Man (to the ladies), he was born in Chester, England, son of Thomas and Cecelia Ellis and passed peacefully at 84.5 years old in Salmon Arm, BC on January 1, 2021.

Mike first came to Canada at 18 years old after serving in the British Army.  He worked as a ski instructor in Banff where he was sometimes seen on the slopes dressed up as the Sasquatch mascot!  He then moved into a very long career driving, starting with buses at Brewsters and ending with tanker trucks at Imperial Oil where he received multiple safe driving awards.  He lived in the lower mainland but moved to Prince George for a few years before retiring in Canoe, BC. He drove through this area for years and always said he would retire here! He also enjoyed travelling, especially to Thailand for golfing!

He loved his family, especially his kids and grand daughter and always enjoyed having us visit. He enjoyed teaching, reading, music, painting, feeding the birds and gardening. He often grew too much and was always happy to share his extra harvest!  He also had a special place in his heart for his neighbours and close friends, you all meant a great deal to him.

Mr. Mike will always be remembered by the neighbourhood kids for drawing water roadways for their bikes using his watering can!  The Candy Man will also be remembered by all the ladies out there (you all know who you are!) who received chocolates from him…it was his way of saying thank you!  He always had a funny, and sometimes inappropriate, joke or comment for anyone who would listen but he was harmless.  Laughter and a smile were his goal.

He was an amazing father, grand father, son, brother, uncle, husband, cousin and friend to so many! All he wanted was to make people happy! He will be greatly missed but always fondly remembered!!

I would like to say a very special thank you to the female paramedic who kept me calm (I don’t know your name, but you are an angel)!  I would also like to thank two other angels…nurses Julie and Amy at Salmon Arm hospital ER Dept.  You were both very compassionate and lovely, thank you both so much for your kindness and love.

A celebration of life is being planned for June 1, 2021 at the Canoe Beach, however this will depend on the public health orders at that time.  More details will be posted on the Canoe Community Facebook page closer to the date.