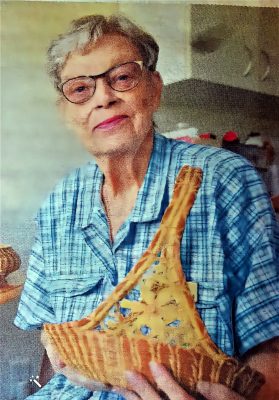 We are saddened to announce the passing of June Thelma Erickson (nee Utgaren) on February 24, 2022 at Hillside Village in Salmon Arm at the age of 88. June was born on the family farm near Beechy, Saskatchewan. She married Freeman (Bland) Hoover and moved through several towns in SK and BC while raising two boys Sid and Daryl. June moved to Salmon Arm in the late 60’s where she was a nurse at the Salmon Arm Hospital, then met and married Ted Erickson. They lived in Blind Bay operating the Ponderosa Resort for a number of years. She volunteered with the Salmon Arm Art Gallery, participated in numerous Salmon Arm Fall Fairs, enjoyed painting and offered pine needle basket weaving lessons to anyone who was interested, and these write-ups with photos can still be obtained on the Gallery’s website.

A special thank you to the staff at Hillside Village and to Sherry for the time you spent with June over the last few years and for all your beautiful hand made cards.

There will not be a service but June will be interred with her son Daryl near Beechy later this spring. In lieu of flowers, donations can be made to a Dementia/Alzheimer charity of your choice.