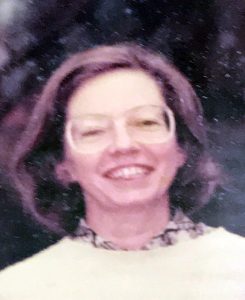 Judy was born in the town of Deloraine, Manitoba on 15 July, 1944.  Following many years of farming on the prairie, the family moved to Vancouver in 1955. Judy graduated from Lord Byng High School in 1963 and worked at BCHydro until soon after she and Ron Harries were married in 1977. The couple lived in Ladner for a number of years until Ron retired from CBC in 1991. Following that they moved to a lovely home in Lee Creek by Shuswap Lake and eventually to Salmon Arm in 1998.
Judy was predeceased by her father Harold Hayden. She is survived by her husband Ron, mother Ruth Hayden (101 years of age) and by brothers Grant (Marina, deceased) of Abbotsford and Lawrence of Nelson and by nephews Bradley (deceased) with two children Daniel and Lorena, and Kenneth (Caroline). Judy is also survived by Ron’s sister Beth Carter (Gibson) of Sisters, Oregon, nephews and nieces Elizabeth Burdett (Dub) of Lubbock, Texas, Daniel Carter (Denise) of Forest Grove, Oregon, Jeffrey Carter (Layla) of Cornelius, Oregon and Sarah Carter (Andy Fayram) of Fort Collins, Colorado and by numerous great nephews and nieces. Diane Conklin, and John and Jeanette Reid all of Vancouver are dear friends who will miss her.
Judy had a great talent for gardening and her garden today is still a lovely mass of blooms. She was a dog lover and an active supporter and participant of the Shuswap Branch of the BC SPCA during her years in the Okanagan. She was also a dedicated cook, loved watching baseball and always wanted to keep up with what was happening on the news. She will be greatly missed by her husband Ron and her loving dog Blaina.
Judy passed away peacefully 19 June 2018 at age 73 in Kelowna General Hospital following a 25 year battle with Crohn’s Disease. Cremation, no service by request. Donations in her memory may be made to the Shuswap Branch of the BC SPCA.