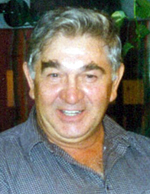 William “Bill” Hook passed away with family by his side on June 13, 2016 in Hillside Village, Salmon Arm, BC at the age of 79 years.

Bill is survived by his loving wife of 57 years Joan; three sons; Bill (Sherry) of Moose Jaw, SK, Jim (Lisa) of Sylvan Lake, AB and David (Pam) of Sorrento, BC; seven grandchildren and three great grandchildren, two sisters and one brother; Katie (Dave) Shunter of Penticton, BC,  Betty Jean Roper of Cranbrook, BC, and Jerry (Beth) of Kaleden, BC and their families.  Bill was predeceased by his parents William and Julia; six sisters; Mary Zackodnik, Tassie Yanko, Helen Schubert, Ann Jordon, Stella Hodgson and Pauline Ambrose, as well as two brothers; Mike and Peter.

Bill and Joan have made there home in the Shuswap for the last 30 years with fond memories of Moose Jaw, SK.

In lieu of flowers donations in Bill’s name may be made to the Heart and Stroke Foundation, 729 Victoria Street, Kamloops BC, V2C 2B5.