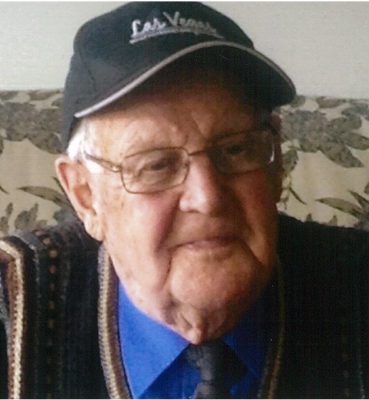 Reed passed away at Hillside Village in Salmon Arm, BC, where he had resided for the last year and a half.  He was 91 years old.

Reed was born in 1929 at Raymond, Alberta to Frank and Crystal Kenney.  In 1950 he married Dolores Schinnour and they had a family.  Reed was a Master Sales Leader for GM many years in a row.  He had a knack for selling cars.  He worked selling cars in Lethbridge, Morrin and Drumheller.  In 1968 Reed moved his family to Salmon Arm.  Reed worked for Honest Mike’s then moved over and worked at Braby’s.  In 1972 Reed and his friend went out on their own buying and selling cars from auctions in Calgary and Vancouver.  They made hundreds of trips over the next five years.

Reed, Dolores and their son Jack moved to Vernon in 1978.  Reed started ”Kenney Sales Ltd.” which was a used car lot located at 4306 29th St. in Vernon.  Fifteen years later Reed decided to sell his car lot and retire.  He tried retirement for a couple of years and decided it just wasn’t working for him, so he went back to work selling cars for Gerald White in Armstrong and Vernon.  After seven or eight years, Reed gave retirement another try.

Reed’s hobbies included horseshoes and bowling.  He bowled on a team in Salmon Arm right up until COVID-19 closed things down.  Reed loved baseball and watching the Blue Jays.

A family celebration of life will be held in the summer, depending on COVID-19 restrictions.

Thank you to everyone at Hillside Village who played an important role in Reed’s life.  Your kindness was appreciated.

In lieu of flowers, donations to the charity of your choice would be welcome.