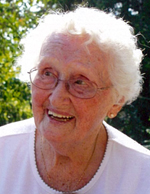 Janet was  born in 1926 in Fyfe, Scotland. She was predeceased by her husband William Evanda Manifold, her son Hugh Donald and her grandson Brandon.

She is survived by her children; Bill (Jean), John (Patty), Barbara (Randy), Robby, Dianne; several grandchildren, great-grandchildren and her much-loved cat.
She was generous, loving and lived her life for her family. Janet was a great mother and friend who loved music, dancing and travel.

The family thanks the doctors and care staff at Hillside Village for the incredibly kind, compassionate and understanding care Janet received.

A gathering for family and friends will be held at a later date.
In lieu of flowers memorial donation s can be made in Janet’s name to the BC SPCA.