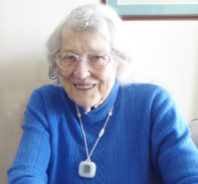 Mum was born in Chilliwack and grew up in North Vancouver and Pender Island. After marriage she lived for over 70 years in Coquitlam spending many of them on a small farm where she had cows and chickens. Mum enjoyed bowling for several years in Port Coquitlam. In 2016 she moved to Lakeside Manor in Salmon Arm where she made many friends. Included in her list of skills were shuffleboard, bingo and scrabble and she didn’t like to lose. As she neared the end of her life, she was lovingly cared for by her daughter Edna Vinet and niece Eila Power. Family was Mum’s greatest asset.

A family get together in remembrance of Mum will be held in June in Armstrong.