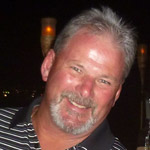 Celebration of Life will be held on Saturday Oct 25 at the Salmon Arm Savings and Credit Union Recreation Centre from 1 – 4 p.m.

I am saddened to announce that on Sept 28, 2014 David Morgan, my beloved husband and best friend lost his short and courageous battle with cancer at Kelowna General Hospital the age of 64 years.

Dave was born on Nov 9, 1949 in Vancouver BC. His family moved from Abbotsford to Kamloops in 1962 where he attended school until graduating in 1969.

His career with Canada Safeway began when he was 16, and continued in Kelowna during the 1970’s.   He was transferred to Salmon Arm as Produce Manager in 1981. He worked a total of 40 years in Safeway until he retired in 2009.

Dave had a zest for life, a lively sense of humor, and a gift of accumulating friends. He had a wide variety of interests including golfing, skiing, boating, kayaking, quading, camping, casual poker games with the guys, and most recently, Barbershop Singing.

He is survived by his loving wife of 43 years, Teri (Hasler), daughters Danielle (Gordon) Walkden, Natalie (Ryan) Ennis and three grandchildren, Daylan, Sydney and Hunter. He also leaves behind three brothers, Larry (Lois), Michael (Margaret) and Rick (Nancy) as well as a large number of nieces, nephews, brothers and sisters in law.

He was predeceased by his father and mother Edward and Eveline Morgan and his niece Michelle.

The family would like to thank the staff at the Shuswap Medical Clinic, the emergency team at Shuswap Lake General Hospital and all the doctors and nurses involved in Dave’s medical care at the Kelowna General Hospital.

In lieu of flowers donations may be made to the Shuswap Lake Hospital Foundation, Box 265, Salmon Arm, BC, V1E 4N3.