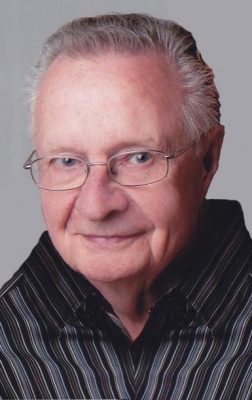 Sadly, our Dad, Grant Edward Nachtigall, left us on Tuesday, June 16, 2020. Born and raised in the town of Steep Rock, MB – he was a talented handy-man, avid outdoorsman, and hard-core hockey fan.

At the age of 17 he moved to Binscarth, MB to finish his education where he met his high school sweetheart, Dawn. Following Dad’s career with CP Rail, our family moved all over the prairies. We lived in various places along the way, but spent significant amounts of time in Moosomin, SK, Brandon, MB, Winnipeg, MB, and Calgary, AB.

Dad had a long and industrious career with CP Rail that took him from the Lakehead Division to Banff. Starting as a Signal Maintainer in Winnipeg in 1960, he held many positions that eventually lead him to the final stop in his career as Special Projects Supervisor in Calgary.

To say Dad was good with his hands would be an understatement – he was a self-taught woodworker and brilliant gardener. You name it, he could fix it. We had a saying in our family: “If Grandpa can’t fix it, nobody can.” He had an amazing work ethic and fantastic sense of humour, right to the end.

All things hockey, curling, and baseball were his greatest passions. He loved the Brooklyn Dodgers, the Winnipeg Blue Bombers, and the various hockey teams that his grandson Kyler played on. In his later years he enjoyed making homemade wine with his son-in-law Steve and perfected a wicked Merlot.

He loved exploring the outdoors and travelling the globe with Dawn. Together they took in all this world has to offer – taking various European river cruises and travelling from Ireland to Costa Rica.

Grant is survived by his wife of nearly 58 years, Dawn Nachtigall; his twin sister Arla, his sister Bernice, his children, Kelvin Nachtigall (Layna) and Pam Allen (Steve), his two grandchildren Emily and Kyler, and numerous other family members, friends, neighbours and admirers. He was predeceased by his brother Don.

We will miss his quiet, loving nature; his contagious giggle, and his ability to fix absolutely anything.

There’s a handy man in heaven now.
Who built his life on dreams.
No task, no chore, no obstacle,
He loved the challenge of extremes.

A caring, honest provider
That unselfishly gave his all,
A heart of gold and hands of love
That responded to the call.

A son, a brother, a family man,
that would help you to the end.
A reliable person of integrity
that all wanted as their friend.

There’s a handy man in heaven now
Who’s fixing heaven’s gate,
Oiling the hinges with pride and care,
So they’ll open for all who wait.