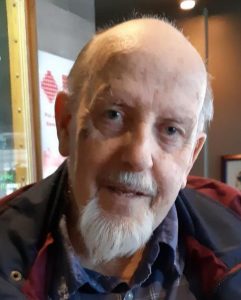 Gordon Neal, 84, of Salmon Arm BC passed away peacefully on June 16, 2019 surrounded by his family and friends.
He was born on March 13, 1935 in West Melton England, one of 11 children of Tom and Edith Neal. He emigrated to Canada in 1967 with his wife Glenys and 3 young children to start a new life in the Northern Alberta town of Fort McMurray. He received his teaching degree from the University of Alberta and taught at Dr K.A. Clark Elementary School for 28 years until his retirement.  He was an avid soccer player and fan and helped establish the Soccer League with fellow Brits in Fort McMurray. He was active in the Masonic Lodge and enjoyed the fellowship with the members there.
In 1994 he relocated to Salmon Arm where he could further pursue his love of gardening, and was always known for his wonderful yard, garden and flowers that he was very proud of. He was always caring and giving and supported numerous charities.  Gordon was best known to all for his quiet demeanor and British accent, was brilliant at crosswords, had a wealth of knowledge and great sense of humor, even to his final moments he had some witty comments for all present! He was married to his wife Glenys for 58 years until her passing in 2015, she was the “colorful” lady that kept Dad on his toes wherever they went.
Gordon is survived by his 3 children, Carly (Edmonton), Adrian (Airdrie) and Beverley (Blind Bay) as well as his 9 grandchildren and 7 great grandchildren.
A special thank you to the staff and friends he had at Arbor Lodge and Bastion Place in Salmon Arm, to Dr. Bell and to Pastor Dave for the lovely service that was held on June 19th in Blind Bay.
He will be greatly missed by those who had the pleasure of having him in their lives, as Dad, Poppa, Gordon and Mr. Neal.