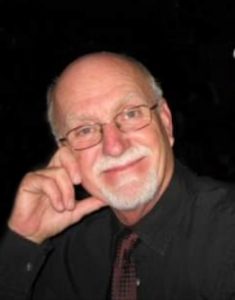 A memorial service will be held at the Kamloops United Church, 421 St Paul Street, Kamloops, B.C., 11 am, Monday, October 29, 2018 presided by Reverend Bruce Comrie.  No flowers by request.

On October 13, Gerry slipped away.  He was raised in Kamloops and soon after graduation, trained as a surveyor at Mica Dam.  In 1987, with his life-long friend, Walden Kiess, they formed a company called Pro-Tech Surveys in Surrey and it was here he and Margaret raised their three children.  In 1976, he purchased his dream home on the channel at Sicamous.  This is where they lived and he enjoyed his retirement years – boating, fishing, and golfing.
He is survived by his wife, Margaret, her children Steve and Naomi; his daughter, Lindsay (Craig); grandchildren, Lynden and Taylah; mother, Evelyn; sisters Marlene and Jeanne (Ralph); nieces, Shannon and Karen.  Gerry was an outstanding example of what every man could be, always willing to lend a hand, a wonderful friend, mentor and teacher.
A memorial service will be held at the Kamloops United Church, 11 am, Monday, October 29 presided by Reverend Bruce Comrie.  In lieu of flowers, donations in Gerry’s memory may be made to the B.C. Cancer Society.

He was a prince of a man