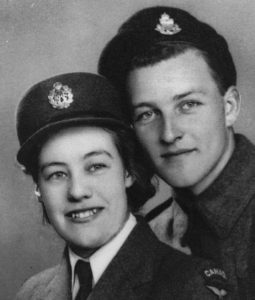 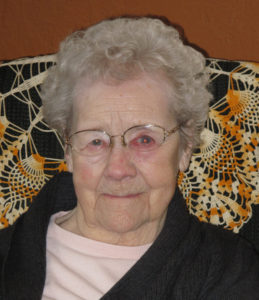 Edna Florence Poulis (nee Dawson) passed away peacefully at the age of 97 on May 26, 2018 in Salmon Arm, B.C. A loving wife and mother, she was born on October 4, 1920 at Halbrite, Saskatchewan to William and Gladys Dawson (nee Evans).
She went on to serve as a nurse with the RCAF 6th Bomber Group during the Second World War. A time in which she also met her husband, Alexander, serving with the South Alberta Regiment. She was awarded a commendation for her military service from the Government of Canada in 2016.
Predeceased by Alexander, she is lovingly remembered by her sister, Doreen Bachorcik; and children Brian, Allan, Randy, and Cathy; grandchildren Jason, Brett, Adam and Jillian; and great-grandchildren Llyra and Tyrion.
A special thank you to the Good Samaritan Society for many years of devoted care.  Edna will be interred at the family plot in Edmonton at a later date. Memorial donations may be made to Variety Club of B.C.