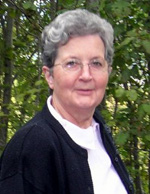 Rosemarie was born to Irmgard and Hugo Limlie on December 5, 1939 in Saaz, Czechoslovakia.
She passed from her earthly journey on May 11, 2016.
The first six years of her life were years of war and hardship. The end of the war did not lessen the trauma as the Czech army moved in to evict all the people of German birth or affiliation.
The order came to take what you could carry and leave. So, mother, grandmother, Rose and her two brothers set out on a walking journey that took more than a week before they reached the German border where they were transported in freight cars to a place where they were joined by relatives.
Housing was scarce and they lived in very cramped quarters for the first couple of years.
Rose received her education, including a two year apprenticeship, in the delicatessen art and trade.
In 1960 she married Bernd Jaumann and in 1965 moved to Canada with son Kurt and daughter Sylvia. Nicole waited to be born in Winnipeg where they made their first home. Later they moved to Portage and then to Vancouver and area.
Sadly Rose and Bernd divorced and Rose worked at several workplaces, including a couple of meat markets, to support the family. In one of the meat markets she got a permanent position as she and Norm married on June 19, 1978.
In 1989 the market was closed and in 1996 Rose and Norm moved to Salmon Arm and with another couple opened the Spiritualist Church of Salmon Arm. Rose was a very important part of this organization throughout all the years that followed.
Rose leaves at her passing, her husband Norm; daughter Sylvia; daughter and son-in-law Nicole and Scott; step-daughter and son-in-law Terry and Jim; grandchildren Cody, Matthew, Haillie, Lara, Susan and Angie and brother, Wolfgang.
Rose will meet in the spirit realms with her first husband Bernd; her son Kurt; her brother Horst and her parents.
She will ever be remembered with love.
No service by request.