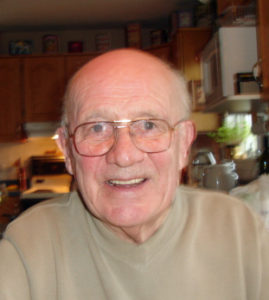 It is with great sadness that we announce the passing of our beloved Jack on March 29, 2018. Jack was one of the last remaining veterans from the Second World War.
Jack was born in Merritt, BC and spent his formative years in Barnet and New Westminster, BC.  When he was 20, he joined the Canadian Army, 8th New Brunswick Hussars and spent the duration of the war in England, Italy and North Africa as a gunner in the tank corps.
Following the war, Jack moved to northern BC where he worked in the logging industry and served as president of the Burns Lake Royal Canadian Legion Branch #50. He soon married and settled in Kitimat where he raised four children and worked as shipping foreman at the Alcan Aluminum Company.
Jack moved to the Lower Mainland in 1970 and married his wife Opal in 1975, becoming a stepfather to her three daughters.  Jack retired in 1986 and built Opal her dream home on Pender Island, where they spent many happy years. Jack was an avid golfer, bowler, curler and bridge player and he and Opal spent many winters as snowbirds in Yuma, AZ.
Jack and Opal moved to Salmon Arm in 2003 and Jack spent the last three years of his life as a resident of the Mount Ida Mews. He is survived by his wife Opal, Salmon Arm; brother Bob Rutherford (Vi), Salmon Arm; sons Bill Rutherford, Inuvik, John Rutherford (Ellie) Kamloops; daughter Teresa Kettner, Surrey, and step-daughters Gay Grant (Ric), Nelson, Sherry Munroe, Salmon Arm and Bonnie Hickey (Dave), Topsail, NL; 14 grandchildren, 19 great-grandchildren and 5 great-great-grandchildren.  Jack was predeceased by his daughter Lee Ramsey in 2014.
Jack’s family would like to thank Dr. Mark Lourens, and the amazing staff at the Mount Ida Mews for their compassionate care of Jack and support to his family over the past three years.