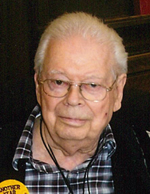 Jack Donald Smith died on May 29, 2016 in Salmon Arm, BC at the age of 94 years.
He is survived by his wife of 44 years, Vivian and his children from his first marriage; Jill Smith (Ellie), Nancy Young (Wayne) and Wendy Hillenbrand (Ross), his grandchildren Scott Smith, April Smith, Valerie Berglund, Matthew Young, Alex Young, Simon and Sarah Blouin, as well as his seven great grandchildren Sadie Smith, Charlotte and Tristan Blouin, Jackson and Spenser Berglund and Carter and Levi Young.  Jack also has four step children and many grandchildren and great grandchildren as well.  Jack is also survived by his sisters Shirley Cooke in Alberta and Betty Mackenzie in Ontario.
Jack graduated in Engineering at Queen’s University in Kingston, Ontario in 1946.  He retired from engineering work in 1986 following a successful career with the Nylon Company of Canada, DuPont, Fluor Canada and SNC.  He was subsequently a member of the Salmon Arm Rotary Club while his health allowed.
Cremation was immediate and no funeral or memorial service is to be held at his request.  Jack’s family would like to thank the compassionate staff at Mount Ida Mews and Shuswap Lodge where he resided previously.
Memorial donations to the Parkinson’s Society, 890 W Pender St #600, Vancouver, BC V6C 1J9   would honour Jack’s memory.