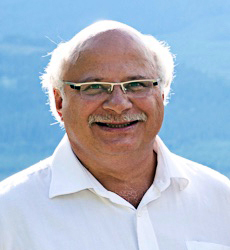 Jerry will be deeply missed in the world. Jerry was an easy going, generous fellow with a great sense of humour. You could drop him into a group of strangers and before long they would all be friends.

Jerry married Lisa, the love of his life and best friend, in 1981. They were married for 39 years. He was proud of his sons Nathan and Colin and loved spending time with their families. The birth of his granddaughters brought him great joy.

Jerry grew up in Shoreacres, son to Anne and George Soukeroff. He was the third child of four children. In his youth he went to school in Castlegar, participating in the Doukhobor Choir and many sports teams. Upon graduating from Selkirk College in Electronics Technology, Jerry started his career with Xerox Canada and retired after 39 years. In 1985 Jerry and his family moved from Prince George to Salmon Arm and found their home. For the last 25 years, Jerry and his family have made many memories in Bucerias, Mexico. As a family they also enjoyed dirt biking, boating, traveling, kayaking, and gardening. Jerry was a loving husband, father, grandpa, brother, uncle, and friend.