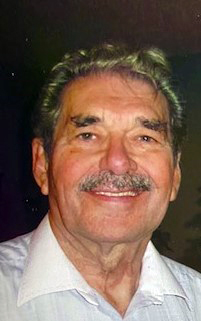 CELEBRATION OF LIFE FOR REGINALD TAMBOLINE Please join us Saturday, July 31st at Fischer’s Funeral Services – 11:00 A.M. – 12:00 P.M. Pastor Irwin Kujat Oﬃciating
Reception to follow at Mountainview Church
4480 30th St. N.E.
Salmon Arm
V1E 2A3
Directions (Old Fashion Style)
-Turn left at the lights on 30th St. N.E. (McDonalds on the hill)
-Proceed straight after 4-way stop sign at 20th Ave. N.E. & 30th St. N.E.
-You will pass Elks Hall and then a farm called Tasty Acres Farm (on right) and then Mountainview parking church parking lot is on the right….at the community mail boxes that are right in front of the parking lot to turn in.
Reception will be held behind the church building in the courtyard which is under a covered canopy.
(there will be sandwiches, goodies and refreshments)
Thanking you in advance for all your love & support!
Diane Storry, Tom Tamboline & Family

Reg Tamboline (Reggie) passed away peacefully at the age of 91 years with his family by his side on May 11, 2021 at Shuswap Lake General Hospital.  He lived a full and active life right up into his 90’s, still going for long walks with family, working as a volunteer in the church thrift shop and driving himself around town.  He was a faithful Christian and was at peace in the end to be joining his Lord and Saviour in heaven.

Born as the eldest son in Vancouver, B.C., his family moved to Westham Island near Ladner, B.C. to take over operation of the family farm when Reg was 7 years old.  There were many new chores and it was hard work for him and his siblings, especially when his father died when Reg was 11 years old.

When the farm was sold they moved back into Vancouver and he graduated from Lord Byng High School in 1948. One of his first jobs was delivering ice (before refrigerators were common) and it was at his work place where he met his wife-to-be Shirley Anne Francis. He went on to be a long-haul trucker for most of his career.  After having three children, they moved from the coast to the Okanagan Valley and then to Kamloops, finally settling in Salmon Arm.  Together for 68 wonderful years, they had a full and happy life even through Shirley’s 10 year battle with Alzheimer’s disease. Reg would visit her in the care home every day and help her with everything she needed to get through the day.

Reg was predeceased by his wife Shirley, his elder son Dan and his younger brother Don.  He is survived by son Tom (Ainslie), daughter Diane (Ron), grandchildren Grant (Lola), David (Nicole), Maeve and Flora and great-granddaughter Zenna.  Reg is survived by his three older sisters: Florence, Margaret and Thelma and by many nieces and nephews.

A special thanks to the staff at the Shuswap Lake General Hospital for their kind and professional care during his final days.

Graveside service for Reg Tamboline was held for immediate family members on May 14, 2021 at Lakeview Memorial Gardens, Kelowna, BC.

A Celebration of Life will be held at a future date at Fischer’s Funeral Services, 4060 1st Avenue SW Salmon Arm, BC.  The hope is that this will occur in the late summer or early fall of this year but is determinant on provincial restrictions on gatherings.  The exact time and date will be posted here on the Fischer’s website.